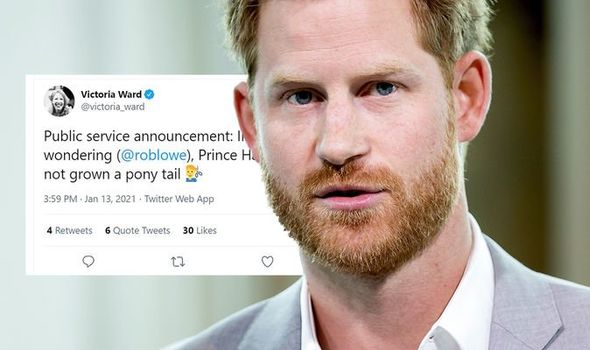 Prince Harry has ‘no close confidents’ in LA says expert

Prince Harry‘s hairstyle has sparked a lively conversation in recent days after his Californian neighbour, actor Rob Lowe claimed he had spotted the Duke « wearing a ponytail » while driving around the neighbourhood. However, a royal correspondent has since spoken out to dismiss the report.

On Wednesday the Telegraph’s royal correspondent Victoria Ward tweeted: « Public service announcement: In case anyone was wondering (@roblowe), Prince Harry has most definitely not grown a ponytail. »

The tweet was in response to a conversation Rob Lowe had with comedian James Corden during Monday’s episode of The Late Late Show.

Mr Lowe told Mr Corden: « I just ran into your countryman, the English treasure, Prince Harry, at the stoplight 10 minutes ago. »

« It was very, very quick — don’t totally quote me on it — but it looked like he’s wearing a ponytail.

Prince Harry does NOT have a ponytail – royal expert shoots down claim about Duke’s hair (Image: Getty/Twitter)

He added:  « I’m just saying. It looked to me as a casual observer that his hair had grown very long and was pulled back very tightly by what I can only assume was a ponytail. »

When Mr Corden questioned whether it was really Prince Harry, Mr Lowe had seen, the actor was emphatic.

He said: « It was him because I have to say… I followed him to the house to see if the car went in. »

Prince Harry: Harry does not have a ponytail despite reports (Image: GETTY)

Another put: « And I thought he was going for the ‘I work in a garden centre’ look. »

While a third teased people for believing Mr Lowe at all.

They joked: « If you all believe Rob Lowe is so smitten by Harry and Meghan that he follows them in a car, then I have a bridge to sell you. »

Meghan and Harry have been based in the states since March.

They were originally reported to be living at Tyler Perry’s mansion in Los Angeles but relocated to Santa Barbara in July.

The couple bought a multimillion-pound mansion in the upmarket neighbourhood of Montecito which is where they are expected to raise their son Archie Harrison.

In recent months they have joined several video calls from their Montecito livingroom.

Prince Harry and Meghan Markle could return to the UK next summer (Image: GETTY)

When will Harry and Meghan return to the UK?

The coronavirus pandemic means Meghan and Harry have been unable to return to the UK with Archie since their royal withdrawal.

They were understood to have accepted an invitation to stay with the Queen at Balmoral last summer but the trip was cancelled due to Covid-19.

This year there are several royal milestones coming up including Prince Philip’s 100th birthday on June 10.

Whether the Sussexes come back to the UK for the Duke’s birthday depends on how the pandemic evolves in the coming months.