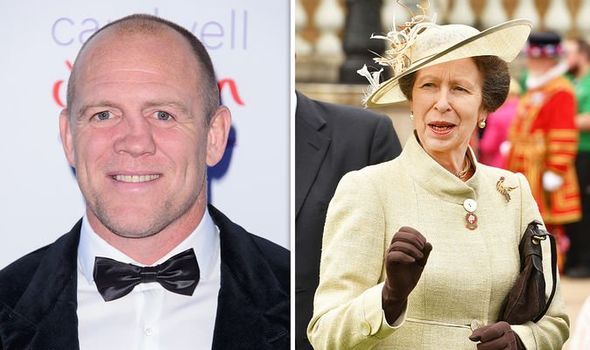 Anne is known for her brutal honesty and sharp tongue. She did not hold back when addressing Mike, her daughter’s husband, when he was preparing for their 2011 nuptials. The former England rugby captain has broken his nose at least eight times during his sporting career, and the Princess Royal was keen for it not to affect the wedding photographs.

His nose was leaning towards the left dramatically in 2011, so much so that The Telegraph claimed that his face was “cruelly mocked” by teammates as “a relief map of the Pennines” for years.

Back in 2018, the publication also revealed that Anne reportedly “offered to pay for the surgery” due to the extent of her concern about the photographs.

While it is not known if she really did suggest paying herself, Mike did confirm when talking to the sports quiz show A League of Their Own that his mother-in-law had asked him to straighten his nose out three months before he wed the Queen’s granddaughter, Zara Phillips.

However, he declined the offer as the Rugby World Cup had been coming up and there was a strong chance his nose could be broken again.

Mike retired from the sport in 2014, and in 2015 dropped the first indication that he might get his nose fixed when speaking to the Daily Mirror.

He explained how he was considering getting the surgery done, and added that “I guess it’s something similar to a pug”.

Yet, he continued: “The problem is that if I get it done, will people say I’ve had it just because I’m doing TV stuff now? Because it’s definitely not.”

Then in 2018, royal fans noticed his face looked different.

Mike declined at the time because he suspected it was going to be broken in the upcoming Rugby World Cup (Image: Getty)

He told Hello! Magazine how he had undergone surgery to fix his nose, when discussing the Val d’Istance Challenge with the publication.

He explained: “I was getting a lot of headaches and my sinuses were fully shut so he had to drill me some new ones so it needed to be done.”

Yet, reporter Emmy Griffiths added: “He revealed that not even the Royal Family noticed the difference.”

Mike continued: “I would say that I did have it done six weeks before anyone actually noticed, in terms of media wise.

“It’s been fine, exactly the reaction I wanted.”

Mike and Zara at their 2011 wedding (Image: Getty)

Mike and Zara attending Harry and Meghan’s wedding in May 2018 (Image: Getty)

Mike broke his nose for the first time when he was just five years old, and had a minor accident when he was in a dodgem car.

He ended up headbutting the steering wheel after the seat belt came loose, smashing his nose into the vehicle.

He underwent the surgery just before Harry and Meghan’s 2018 wedding.

Mike and Zara are close with Prince Harry because, like Mike, he is « down to earth » (Image: Getty)

Mike’s nose before and after corrective surgery (Image: Getty)

Some royal watchers speculated that he may have wanted to improve his appearance for their big day as he was considering calling one of the couple to be a godparent to his youngest daughter.

Royal expert and former BBC Court correspondent Michael Cole: “It is entirely possible that the Tindalls will ask Zara’s cousin Prince Harry (or even his bride to be) to be a godparent.

“Prince Harry is as down to earth as his cousin and her husband who, of course, he admired as a rugby player.”

An anonymous source also told the Daily Mail that he had two known operations to improve his breathing over the years.

Queen heartbreak: Descendants of her swans handed to city in Florida as a gift to be…