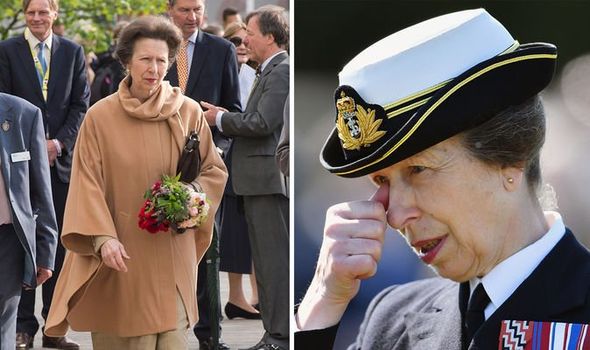 Princess Anne appeared on Terry Wogan’s show ‘Wogan’ in 1985 and the host opened the interview by apologising for his previous behaviour. He said: “Welcome Ma’am, but it’s awfully good of you to turn up really, because the last time we were due to meet I in fact let you down rather badly, didn’t I?” Anne replied: “Yes, there was a bit of an empty space beside me at lunch.”

Mr Wogan looked awkward as he insisted he had had a “pressing engagement” elsewhere.

He added that he heard she “made capital” out of the situation.

Anne said: “I said, actually, that I had had the pleasure of sitting next to you before and I thought perhaps, as you knew what was in store, you decided to go elsewhere.”

The TV host joked that it was a « vile and contemptible calumny ».

The pair then went on to discuss the first time they had met, which was at another lunch event.

Mr Wogan recalled that Anne had told him about “the vicissitudes of being a farmer’s wife”, referring to her simple country life with her husband Mark Phillips.

Captain Phillips had been in the Army and, like the princess herself, an eventing champion.

However, after they got married and had children, Mark quit the Army and became a farmer at Gatcombe Park in Gloucestershire, a country home that was a wedding gift from the Queen.

Mr Wogan claimed Anne had said it was “hard to make ends meet” as a farmers’ wife.

She said: “Yes we were discussing that farmers all over the world, I think, are never happy.

“And that is something that in my travels so far has been endorsed and underlined in several different languages.”

Mr Wogan asked whether Anne gets involved with the economics of running the farm herself, branding her a “sturdy yeoman’s wife”.

The princess said she left the overall running of the farm to her husband, but that she did muck in every now and then, at certain times of the year.

She joked that she is “expected” to help with “muck-spreading”, rather than being asked.

However, Anne’s quiet life as a farmer’s wife did not work out exactly as planned.

Just four years after this interview on ‘Wogan’, love letters stolen from Anne’s briefcase at Buckingham Palace revealed she had been having an affair with Commander Timothy Laurence, Equerry to her mother, Queen Elizabeth II.

She and Mark promptly separated and then divorced in 1992.

Anne then married Commander Laurence in a small ceremony in Scotland and he moved into the family home at Gatcombe.

Meanwhile, Mark moved into the farm next door.

He later married Sandy Pfleuger, an American Olympic dressage rider and the pair had a daughter in 1997.

However, in 2012 it was confirmed that they had separated, intending to divorce.

Queen heartbreak: Descendants of her swans handed to city in Florida as a gift to be…