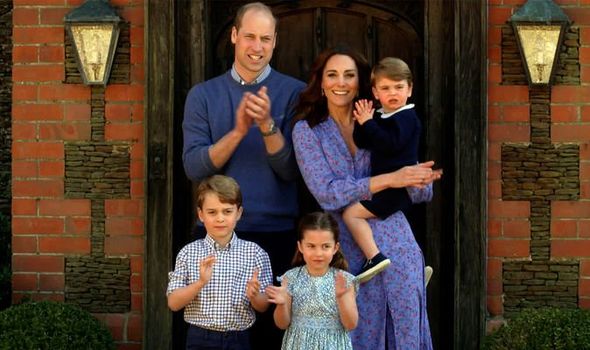 The Duchess of Cambridge often makes takes inspiration from her late mother-in-law with her effortless style choices, and yesterday was no exception as she looked radiant in a floral Ghost London dress.

A statement 80’s inspired collar that is the fashion staple of the season featured on Kate’s fashion-forward dress.

While the ruffled trim of the duchess’s gown recalled the style Diana wore on many occasions particularly while she was pregnant.

The summery blue number is currently for sale at John Lewis, but is sure to sell out like so many other pieces do that Kate wears.

Kate, The Duchess of Cambridge made a touching tribute to the late Princess Diana (Image: GETTY)

The ruffled trim of the duchess’s dress certainly recalled the style Diana wore on many occasions. (Image: GETTY)

Back in 1982, Princess Diana wore an extraordinarily similar dress to the number seen on Kate yesterday.

Diana wore a ruffled collar outfit while carrying Prince William as she embraced the decadent trend of the time.

It comes as earlier this week the people’s princess was praised by supermodels Naomi Campbell and Cindy Crawford on the former’s YouTube channel after she invited them to celebrate her son Prince William’s 13th birthday back in 1995.

On Naomi Campbell’s online show No Filter with Naomi, the supermodel reminisced with fellow fashionista Cindy about the famous birthday celebration.

READ MORE:Royal snub: Why William ‘hated every second of being made into icon’

Back in 1982 Princess Diana wore an extraordinarily similar dress to the number seen on Kate (Image: GETTY)

They revealed how Diana wanted to make the occasion special by inviting the bombshell models that featured on her eldest son’s wall to his party.

Not only did the princess invite Prince Willam’s teenage fantasies to his birthday, but she also cheekily treated her son to a cake baked in the shape of breasts.

Diana would be dismayed over the distance between the wives of brothers William and Harry (Image: GETTY)

Naomi revealed to her audience of over 300,000 how Princess Diana enlisted her to surprise the young prince.

She added: “Loved Princess Diana, I just loved her. Humble, how down-to-earth and I’m just blessed to know her for the time that I did.”

Diana was extremely close with her sons when they were growing up, and she certainly would be proud of the men they have come today, however it has been suggested that she would be dismayed over the distance between the wives of brothers William and Harry.

Prince Harry already admitted that the brothers are on “different paths” after he chose to step down as a senior royal this year.

The reported tensions between William and Harry coming to a climax, when the Duke of Sussex announced that he along with his wife, Meghan Markle and young son Archie would be departing Britain for Canada.

The move reportedly leaving William, the Queen and Prince Charles “hurt” and “disappointed.”

In an interview with Page 6, royal photographer Jayne Fincher told the website: “(Diana) would be doing everything she could to try and solve it.

Tensions are rumoured to have been brewing for a while. (Image: GETTY)

“She’d be doing everything to be the peacemaker.

“She’d be shaking the boy’s heads together saying, ‘For goodness sake. What’s going on here?”

“And I think she’d be trying to make peace between the girls, too.”

Growing up, she said the two boys « did everything together…The boys have gone through so much together.”