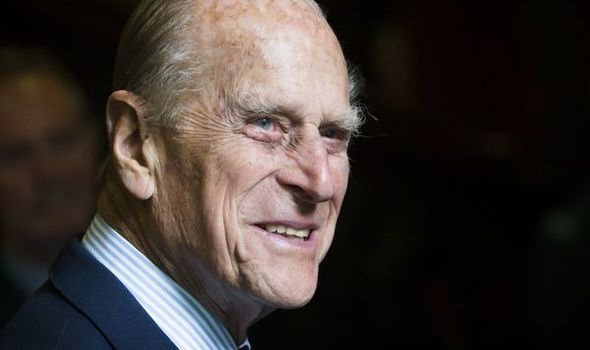 The Duke of Edinburgh, who turns 99 in June, has kept a very low public profile since his retirement from public duty in 2017. On Monday, he took the unusual step to thank all essential workers, who have valiantly been carrying out their work to ensure that the “infrastructure of our life continues” during the crisis. In an interview with Vanity Fair, royal expert Ingrid Seward said that it was very “unusual” for Prince Philip to make such a public intervention.

She said the Prince was not trying to “reach out” to the nation, but was seeking to show support to his affiliated charities in these difficult times.

“He’ll be watching everything with keen interest.”

A palace insider said that the Queen and her husband were following the crisis “very closely” as they continued to self-isolate at Windsor Castle.

In a letter on headed paper and signed “Philip”, the Duke said: « As we approach World Immunisation Week, I wanted to recognise the vital and urgent work being done by so many to tackle the pandemic.

“By those in the medical and scientific professions, at universities and research institutions, all united in working to protect us from Covid-19.

« On behalf of those of us who remain safe and at home, I also wanted to thank all key workers who ensure the infrastructure of our life continues.

“The staff and volunteers working in food production and distribution, those keeping postal and delivery services going, and those ensuring the rubbish continues to be collected. »

JUST IN: Prince Philip and Queen: How Queen relies on Duke’s ‘sage advice’

Her birthday celebrations have been scaled down in the wake of the coronavirus pandemic (Image: Getty)

The Duke of Edinburgh continues to represent more than 750 organisations in his retirement.

These include the scientific, technological research, healthcare and infrastructure sectors, which have been responding to the outbreak.

On Tuesday, the Queen and Prince Philip celebrated the monarch’s 94th birthday in the privacy of their Windsor Castle apartment.

Her birthday celebrations have been scaled down in the wake of the coronavirus pandemic, that has led to a lockdown of social and economic life in the UK.

The Duke of Edinburgh continues to represent more than 750 organisations in his retirement. (Image: GETTY)

Prince William and his wife Kate, the Duchess of Cambridge, posted to their Instagram site (Image: GETTY)

The monarch requested that there should be no special gun salutes to mark her birthday this year.

This year’s Trooping the Colour, which is the official and public celebration of her birthday in June, has also been cancelled.

However, the curfew could not stop members of the royal family from wishing Her Majesty a happy birthday.

Prince William and his wife Kate, the Duchess of Cambridge, posted to their Instagram site a photo of all three of them altogether at the Chelsea Flower Show last May.

The Duke and Duchess of Cambridge wrote: “Wishing Her Majesty The Queen a very happy 94th birthday today!”

Prince Charles, 71, paid tribute to his mother on social media with a mix of old and new photos.

One was a black-and-white photo that shows Queen Elizabeth smile at her young son as he sits in a playpen.

The post concludes with a snap of the Queen with her two eldest children, Charles and Princess Anne.

“Wishing Her Majesty The Queen a very Happy 94th Birthday,” they wrote.