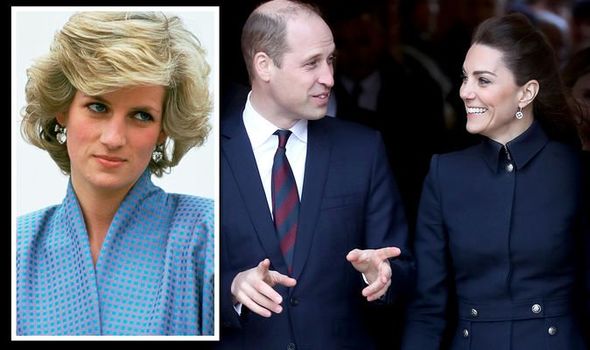 The Duke and Duchess of Cambridge married in their spectacular 2011 royal wedding, and are now the proud parents of Prince George, Princess Charlotte and Prince Louis. The pair’s happy union comes in contrast to the marriage of Prince William’s parents Prince Charles and Princess Diana, which was notoriously rocky and ended in divorce in 1996. Whereas Diana always struggled with royal life, and worried that her eldest son would face the same problems, Kate has been crucial in helping William settle into his successful role, according an expert.

Veteran royal editor Robert Jobson, in his 2006 book “William’s Princess” takes a look at how Kate and William have navigated royal life together.

Mr Jobson writes: “William is a young man on the cusp of embracing public life and, hopefully, securing private happiness.

“He knows that his duty makes his life a sort of sacrifice to the state, but has over the past decade or so shown that he is not one to completely submerge his personal needs and wants as a result.

“He is starting to find a personal equilibrium that long eluded both his mother and his father in their private and public lives.

Princess Diana; the Duke and Duchess of Cambridge (Image: Getty)

William and Kate this month talking about their life during lockdown (Image: Getty)

The Duke and Duchess on Commonwealth Day in March (Image: Getty)

“Perhaps partly because, in the figure of Kate, he has found a girl who can make sense of his conflicting character traits and the opposing demands of his life as a modern prince.

“She keeps him in touch with a lifestyle from which, by virtue of his HRH, he will always be one step removed.

“In Kate, William has found a sensible and attractive girl who, in emotional terms, demands very little of him. For a boy who has lived through the heat of the War of the Waleses, that must seem like bliss.”

READ MORE: How William was painfully aware of his fraught choice with Kate

Diana and Charles always struggled to understand each other, and the Princess of Wales often battled with feeling accepted by the Royal Family.

However, in Kate, William appears to have found someone who understands him perfectly.

Mr Jobson writes: “He is a mass of contradictions. His character is one forged in the fires of a youth at once troubled and blessed.

“William is a young man who often confounds the predictions of those who would like to simply slot him into a convenient category.

“He is by turns intensely sensitive  – his mother often worried that he, like her, was too sensitive for the life that royalty demanded – and laddishly bullish.

“He is the future king who visited amusement parks as a child, who plays football, is up to speed on contemporary culture and enjoys a pint with his friends.

“But he is not, for all that, a man entirely of our time.

“Home to William is still a variety of palaces and mansions where the walls are hung thick with exquisite works of art and where weekend shooting parties follow the seasons.

“This ‘sensitive’ young man loves the hunting and fishing lifestyle that seems a complete anachronism when set against the flip side of his character.”