Kate Middleton heartbreak: How Duchess 'had heart set on OTHER name for George' 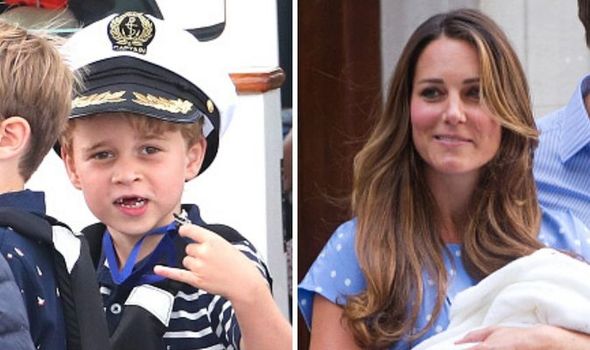 The Duke and Duchess of Cambridge are parents to Prince George, Princess Charlotte and Prince Louis. Prince George has become a firm favourite with royal watchers since his birth in 2013, as the nation has watched him go on royal tours, start school, and welcome his siblings. The little prince is also well-known by his nickname – PG, or PG Tips, after his initials.

However, Kate reportedly had her heart set on a completely different name for her firstborn.

Writing in Vanity Fair in 2013, royal expert Katie Nicholl revealed the name – and how Kate was certain she was going to have a boy.

Ms Nicholl wrote: “Courtiers insisted the pair had not found out the sex of their unborn baby, and friends close to the couple claim William wanted a surprise.

“Although Kate apparently suspected it was a boy and had set her heart on the name Alexander, they had not yet decided what to call their firstborn.”

Prince George and the Duchess of Cambridge (Image: Getty)

Kate and William introduce baby George to the world in 2013 (Image: Getty)

Ms Nicholl continued: “Kate was reported to have affectionately referred to her bump as ‘our little grape’ while she was pregnant, and there was a flurry of betting on possible names.”

A friend of the couple told the author: ”When I saw William a few weeks before the birth he said they didn’t know (the baby’s gender) and didn’t want to find out.

« He said there are so few surprises in life — this was one he wanted to keep.

“Kate said she thought it was a boy because the baby kicked so much. »

In the end, of course, the couple decided on the name George for their little boy, which harks back to the Queen’s father, King George VI.

The Duke and Duchess did however retain Kate’s favourite name – as one of George’s middle names.

The Duke and Duchess of Cambridge have continued with a naming tradition that honours older members of the Royal Family, too.

DON’T MISS
Why George’s heir could be Princess of Wales NOT Duchess of Cornwall (REVEALED)
Princess Charlotte could have had unprecedented royal role (INSIGHT)
Why George, Charlotte and Louis could be put in ‘unfair’ position (EXPLAINED)

A solemn Prince George at Christmas in 2019 (Image: Getty)

The Cambridge family all together at Troopig the Colour last summer (Image: Getty)

Princess Charlotte was born in 2015, and named after her grandfather Prince Charles.

Prince Louis followed in 2018, and is named for Louis Mountbatten, Prince Philip’s uncle and “honorary grandfather” to Prince Charles.

She wrote: “William had hunted out some of his old childhood toys from the attic at Highgrove — he was keen to find his favourite teddy bear, called Wombat (his own childhood nickname) — and their spare room was turned into a makeshift nursery complete with a changing station and a Moses basket.”

As the nation waited in the sweltering heat for news of the new little prince, Ms Nicholl revealed that members of the Royal Family were on tenterhooks too.

She wrote: “It wasn’t just the hot and flustered media throng that was growing impatient.

“Prince Charles and Camilla continued their engagements around the country and admitted to wellwishers that they were ‘all waiting at the end of the telephone,’ while the Queen told one little girl during a walkabout at Lake Windermere, in Cumbria, that she hoped the royal baby would ‘hurry up’ because she was planning to go to Balmoral for her annual holiday. »